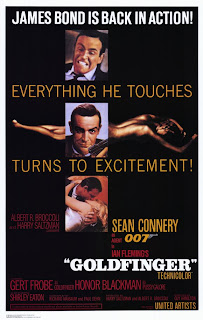 Auric Goldfinger (not to be confused with half-brother Agric Silverfinger or his developmentally challenged cousin Plumbic Leadfinger) conspires to ruin the financial world by once and for all taking the U.S. off the gold standard. Despite the ambiguous motivations of its characters, Goldfinger codifies the formula for all future Bond films. Sean Connery has long been regarded as the "best Bond", with this being the "best Bond film," although it must be said that Matt believes the one-off Lazenby film On Her Majesty's Secret Service is perhaps a little overlooked... just sayin'.

Download: 045 Goldfinger by Guy Hamilton
Posted by Matt Rivett at 12:41 AM