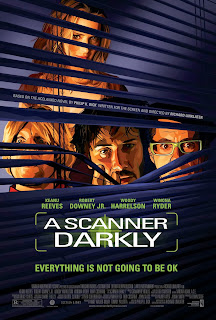 A film tailor made for Philip K Dick fans, where many Hollywood blockbusters have failed (yep, that's my finger and it's pointed at you Stephen Spielberg and John Woo) Richard Linklater delivers the goods.... which may be the reason ASD didn't bring the masses to the megaplex, but whatever. While not necessarily the most coherent of podcasts to date, we try to get to the 'dark' heart of A Scanner Darkly's drug fueled paranoia, with our meager sober minds.