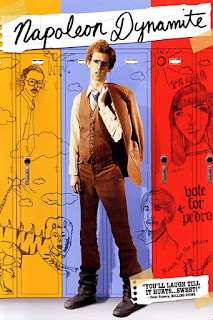 Apparently it takes an LDS BYU grad to truly get the nerd right when it comes to Hollywood film making. Scrap the stereotypes of the late night hacking (but cool) nerds of standard film fare, because the true nerd is one like Napoleon, social hobbled yet obsessed over things which bring no social currency. One of Matt's favorite funny movies, it's hard to watch ND with a straight face, even if you've seen the film too many times to count. Anyway, Vote for Pedro and enjoy.

Download: 166 Napoleon Dynamite
Posted by Matt Rivett at 6:58 AM