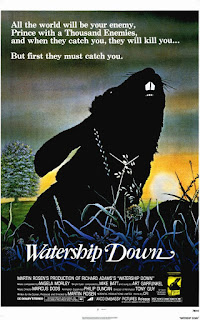 Matt and Mark's "For the Kids" marathon continues this week with the "family" adventure film Watership Down, a famed animated production from Britain released in 1978. Despite Matt's decades long ignorance regarding the film's name (It's a place? What? Not some esoteric reference to societal downfall?), we try to suss out what's great about this film. With realistic depictions of violence and a naturalist style, it marginalizes the familiar animated tropes of Disney-esque anthropomorphism, elevating it to something greater. And why a film about rabbits? Because there's perhaps a universal truth to be told from creatures who must fear everything, a justified dread that taps into our vestigial brains and perhaps a reason so many children remember this film.