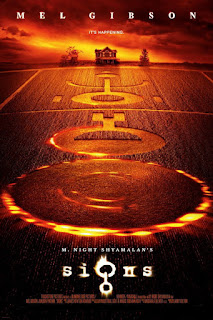 Signs, signs, everywhere signs... A film about apostasy that just happens to be set in the midst of an alien invasion, M. Night Shyalaman's Signs explores the importance of belief systems and the human brain's need to create constructs via pattern recognition. Mel Gibson, the mad genius bastards that he is, delivers one of his best performances as the recently faithless Reverend Hess. An exercise in less is more, Signs brings tension to the table sorely lacking in current films. M.Night shouldn't be dismissed due to his recent bombs, and here he's firing on all cylinders.