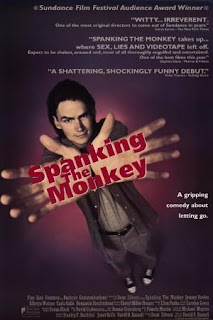 Ah yes, the classic teen summer sex comedy where the frustrated protagonist, in a series of hijinks, ends up sleeping with his mom... no.... wait! Yep, 1994's Spanking the Monkey builds the strangely believable scenario of how such a preposterous Greek drama may actually unfold in the sub-urban present day. Matt and Mark agree that the film would have been able to deliver its point without the taboo act, but would it have been as poignant? Perhaps. But in a truly dysfunctional family, rife with jealousy and unrequited needs, incest as an act of vandalism maybe isn't that unbelievable. However, Matt and Mark agree, having to spank the titular monkey in the bathroom of a somewhat empty house is absolute contrivance!

Download: 204 Spanking the Monkey
Posted by Matt Rivett at 6:17 AM