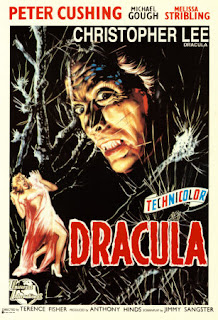 The unsung Christopher Lee stars as the titular Dracula in this classic Hammer Horror film released in 1958. Titled "Horror of Dracula" stateside, as to not confuse the Bela Lugosi holdouts 25 years earlier, Lee defines menace and could arguable be the best portrayal of the undead count. Liberally reworked from the original Bram Stoker novel, it captures Le'essance of the Dracula idea, a seductive charming wraith with a supernatural force complimenting the natural ensemble. While we all wait for Bahaus to change the lyrics over to "Christopher Lee is Dead", we have this cinematic horror gem to relish.