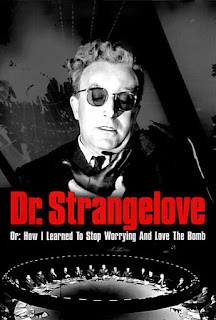 This week Matt and Mark review the holy grail of black comedies, Stanley Kubrick's Dr. Strangelove... A biting satire about the very realistic possibility of a nuclear holocaust. It's impressive not only for its subject matter, but also for its timing: in the middle of paranoid ravaged 60's America. Peter Sellers' performances coupled with G.C.Scott's Turgidson, Slim Picken's Kong, and Hayden's Ripper are some of the greatest comedic and satirical performances put to film. So, as Morrissey says let the bomb bring us together.