244 Trinity and Beyond: The Atomic Bomb Movie 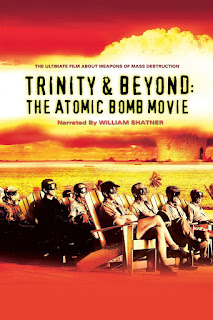 Shot Mark and Ivy Matt finish out our docu-athon this week with the dispassionate Trinity and Beyond: The Atomic Bomb Movie, narrated by William Shatner. Its lack of emotion coupled with a minimalist straight forward narrative is argued to be its drawback, while Matt argues the opposite. As an engineering project, Trinity and Beyond takes the viewer through the lab bench proving grounds of the Pacific and Nevada as the United States hones the weaponry which re-defined geopolitics. As a hardware nerd, the film offers quite a bit (or at least as much as it can in 90 minutes), however as a passionate member of the human race, there's little to glom onto .

Download: 244 Trinity and Beyond
Posted by Matt Rivett at 7:57 PM