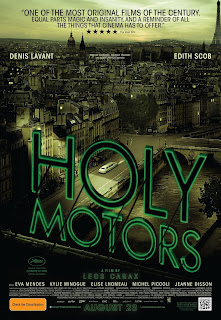 Matt and Mark review the 2012 French film "Holy Motors" this go around. A very Jodorosky-esque film, its filled with cut-up non-sequiturs loosely tied together by a vaguely metaphoric limousine and it's enigmatic passenger. Perhaps too reference heavy for average American Joe, Holy Motors nods to all that is cinema, providing a meta-landscape where its denizens are in fact incarnations of film themselves. Beyond it's context-free acting indulgences, Holy Motors is a striking film to look at and absorb. But if you're looking for anything resembling a plot, move along.