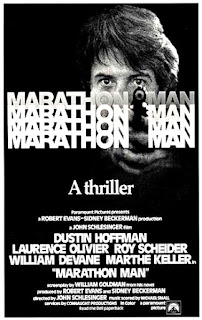 Mark and Matt review the 1976 thriller Marathon Man. While not a particular strong movie or a well-plotted film, Marathon Man holds its own as well as any thriller of its genre, so much so that's it's remained a cult favorite for over 40 years. With Dustin Hoffman and Roy Schieder in their prime, backed up by the lethal paranoid presence of Sir Laurence Olivier, MM indulges the 70's aesthetic or "je ne sais quoi" of the era. That and everyone hates Nazis, so seeing a Nazi get what's coming to him is always a crowd pleasing claptrap.