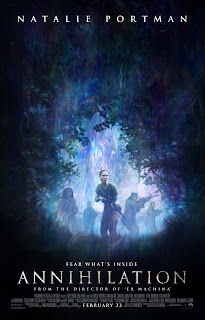 Can a recent movie be considered cult-worthy? Regardless, Matt and Mark have endeavored to review the recent 2018 release Annihilation. Based after Jeff Vandermeer's novel of the same name, it is a cinematic treatment of the sci-fi "New Weird" genre. An alien encounter film in the vein of Carpenter's The Thing and H.P. Lovecraft's "The Colour Out of Space" (complete with rainbow shimmer) it defies the almost obligatory anthropomorphic alien encounters so typical in film. Annihilation doesn't spend its time sketching its characters in a reality we typical expect. Its characters, while fully human, are as unreal in their interpersonal relationships as the alien vortex consuming Southern Florida.