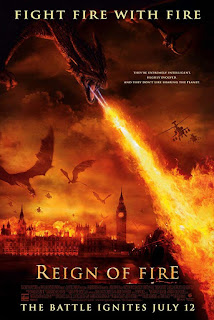 What can we say about an Apocalyptic Dragon mash-up film like Reign of Fire? Matt and Mark indulge this most unlikely of films with our review of the McConaughey/Bale sci-fi/fantasy popcorn movie. While it shouldn't work, it kind of does and for that we forgive it its many grievous sins of plausibility and bad acting. The fact that Ebert gave it 1 star, yet here we are reviewing it 16 later should count for something... shouldn't it? Nothing of this elder talking dragon nonsense, what do we like most about dragons? Burning shit up!