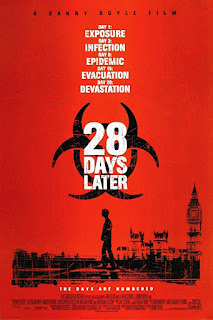 It's 28 Days Later and we're back with our 28 Days Later Podcast in our run up to Halloween! This go round we're reviewing zombie fair, in particular the "fast zombie" types. 28 Days kicked off the renaissance in how we depict the undead in film: more "Aliens" and less Romero. Besides its evocative beginning, 28 Days succeeds because it addresses fundamental humanity with its obvious juxtapositions. Because zombies allows us to play around with notions of humanity, fundamental morality is put into question, even mass murder.