286 The Serpent and The Rainbow 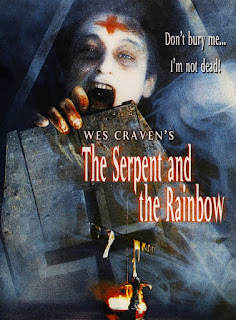 Finishing up our zombie run, we review the Wes Craven "true life" zombie film The Serpent and the Rainbow. Steeped in voodoo, Wes goes to the source of the zombie origin story and brings to life (pun intended) the legend of the "undead." While the film conjures the supernatural, it's blended into the story in such a way that skirts the magical, making it a fun ride. Matt and Mark spend a considerable amount of time debating the "exotic fetishism" of Dr. Alan's character with only a modicum of genuine theory. Whatever the true impetus, we both agree it seems like a good time.

Download: 286 The Serpent and The Rainbow
Posted by Matt Rivett at 10:36 PM