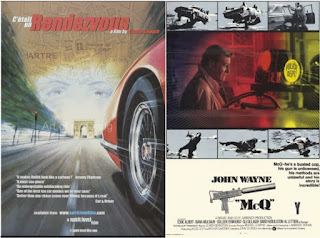 Matt and Mark do up a double feature this week (kind of) for our 70's car-movie theme with the 1976 short "Rendevous" and the John Wayne 1974 Neo-Noir McQ. Matt waxes nostalgic over his favorite city Paris, while both Matt and Mark wax nostalgic over the uncrowded free-ways of early 70's Seattle. As Seattle natives, we ponder the set pieces of Wayne's McQ and its set-piece car chase, while parsing out the acting talents of the venerable and storied Wayne. Is it a Bullitt knock-off? Does it matter? Foreign to both Wayne's Western canon and the zeitgeist of early 70's popcorn cinema, we try to appreciate McQ with fresh eyes. Despite its mediocre reviews, Wayne is certainly a charismatic actor worthy of his legend.