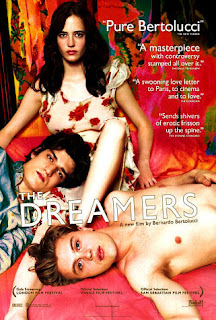 "Young Lust" continues with our review of  NC-17 rated The Dreamers from 2003 by Bernardo Bertolucci. Matt and Mark get into the world of the over-heated Paris apartment's artificial realms of cinema, sex, and sibling co-dependence. Heavily driven by the nostalgia of the chaotic Paris streets of 1968, it's hard not to see why the Bohemians of this era champion this film. However, there's something stranger and darker going on that's hard to comprehend. While having unending sex with Isabelle (Eva Green) for days on end sounds enticing (well, at least for dudes), the creepy monitoring of her brother Theo is the price Michael pays. So off the map is this strange trio, the mere act of asking someone out on a date breaks the status quo.