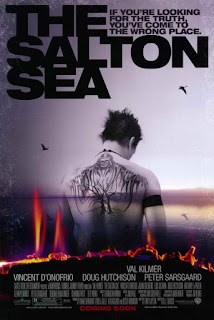 This go 'round Mark and Matt review some stylized drug-fueled So-Cal tweaking with the Val Kilmer film The Salton Sea. A film that somehow romanticized meth use in a weird away, we ride along with Danny Parker / Tom Van Allen on his circuitous route to redemption and revenge. Along the way we meet the Vincent D'Onofrio incarnation of "Pooh-Bear", a film character like no other, also backed up by the fun Mexican-stereotypes of drug toughs played by non other than Luis Guzman and Danny Trejo (in one film!). So snort a line, kick back, and watch three days burn in the blink of an eye and enjoy... The Salton Sea.