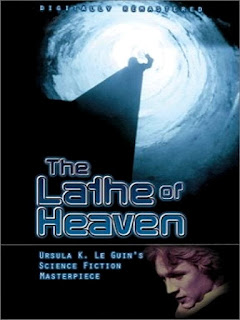 Matt and Mark go cult arcana this week with the 1980 PBS production of the Ursala Le Quin classic The Lathe of Heaven (Watch it on YouTube for free!). Hidden away for more than 20 years due to a broadcast rights issue, it stuck in our collective cinematic consciousness. A pioneering film in contrast to the more bombastic space opera fair, it delves into the purity of true Science Fiction, laying the ground work for such 21st Century film makers as Alex Garland and Shane Carruth. A "monkey's paw" story, we enter the mind of the main character Orr's "effective dreams." A type of reality-amnesia that reforms out of the sub-conscious, we see the scene change from dream-to-dream in a composite state of simultaneous utopia and dystopia. Filmed on a shoestring, we forgive it its production faults as its "big ideas" seethe with an intensity rarely awarded to greater films.