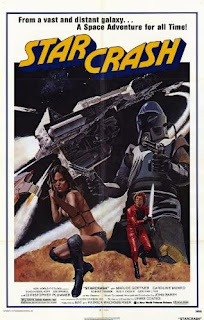 Once again Matt and Mark have a lot to say about current affairs (it's 2020... so, it's like every week these days), and less to say about the Star Wars coattails outing "Star Crash", a movie poorly engineered in order to capitalize on the Lucas pop culture phenomena. A bad move, of course, it's major sin is that it's boring. If you're going to bad, please be entertaining. We try to do our best to inject a little MST3K into the mix, but it is what it is... However, we are treated to a worthy Hoff' in an early role, noting his potential for future cheesy Sci-Fi outings like Knight Rider with a glint of Euro-trash..