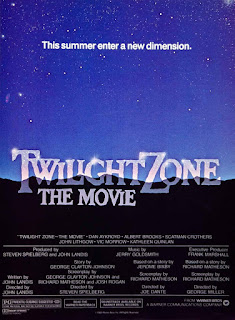 What's better than a Richard Matheson screenplay directed by mastermind George Miller? F#$kin' nothin! That's right... the finale of the oddball Twilight Zone: The Movie is the ridiculously amazing remake of the original Shatner episode "Terror at 20,000 ft". Is it worth the milquetoast offing's by Spielberg and Landis? Perhaps. But like a series of shoe gazing and boring opening acts at the beginning, the penultimate "It's a Good Life" offers up some Rob Botin FX that make it both memorable and creepy. But in the end, it's Lithgow's Xanax deprived flyer that reigns supreme. Want to see something scary?