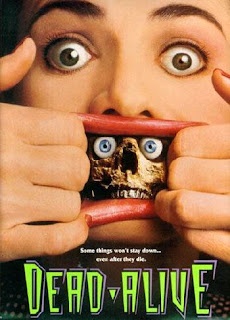 We indulge a little of Peter "Action" Jackson's earlier works this week on the podcast when we review his zombie comedy-horror film Dead Alive, released in 1993. Matt and Mark speculate how the Oscar winning director of the Lord of the Rings films got from homicidal rat-monkeys and zombie-babies to Gandalf and Frodo. Strangely, we come to the conclusion that it wasn't too great a leap. Emulating the style of Evil Dead director Sam Ramie, we're treated to splatter-fest of hilarious proportions. Enjoy!

Download: 028 Dead Alive by Peter Jackson
Posted by Matt Rivett at 11:36 AM