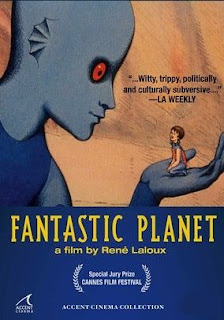 An animated French film from 1973, this week Matt and Mark review the cultish Fantastic Planet (aka The Savage Planet). A beautifully animated film, it questions humanity's preeminent position in the universe by depicting us as lesser things, specifically vermin. As the playthings and pests of greater aliens, humans (or Omes as depicted in the film) face a type of indifference which can only be described as cruelty. But just like the bugs or bacteria of our current Post-Halocene epoch, the worm eventually turns, and the meek inherit the Earth, or perhaps the Fantastic Planet.

Download: 176 Fantastic Planet
Posted by Matt Rivett at 6:40 AM