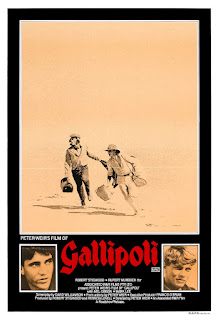 Mark and Matt is kicking off a mini-World War I movie marathon (actually two movies) to commemorate the 100 year anniversary of the Great One. While not exactly a heavy anti-war film, Gallipoli isn't so much about war as it is about the personalities that populate them. Has romanticism and combat really been exorcised from young men? If there is a solid thematic element to Gallipoli, it questions the strange draw young men have to fighting strangers in strange lands.