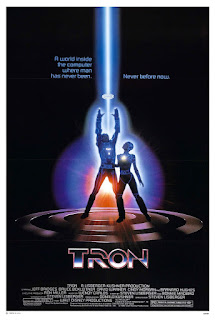 This week Matt and Mark review the surprisingly ahead of its time Tron, by none other than Walt Disney Productions. A film that is unapologeticaly set within the confines of a computerized world, it would set the precedent for such later VR films as The Matrix and Inception that would give the filmmaker free reign to design plausible and spectacular fantasy worlds manufactured inside printed circuit boards. A beautifully rendered movie, Tron holds its own 35 years later and is as fresh and fun now as it was back then: a summer movie if there ever was one. It's a movie that fights for the users.