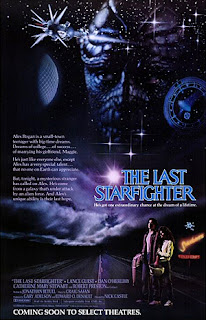 This week we head back to the early 80's for some primitive cinematic CGI with The Last Starfighter. With a somewhat gimmicky but weak main storyline, the film benefits from a humor filmed subplot involving the Alex Beta unit. Filled with Spielbergian kid culture 80's tropes, the films fits the time period but is perhaps a lesser offering. While its attempt at CGI special effects are noble, they don't allow the film to ascend to Tron-like stature.

Download: 250 The Last Starfighter
Posted by Matt Rivett at 5:58 AM