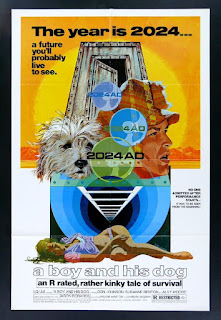 In the year 2024... 'bout 6 years from now... we'll all be living off the carcass of a buried civilized world. At least that's the setting for the Ellison adaptation, A Boy and His Dog. A great piece of science fiction, what ABaHD gets right is that the character of Vic is truly a creation of his world and not a mere avatar from ours. He does not need to justify his serial raping and pillaging. His morality is a construct of a post nuclear Phoenix Az. Which, of course, puts him at odds with the weird down-under cult inhabiting an underground vault of 20th Century Americana. A unique film, ABaHD delivers a world without expostiion, and in doing so, bids a healthy f**k you to Disney's Shaggy Dog franchise.