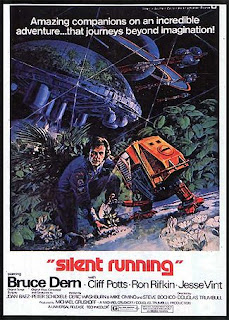 Continuing our ad-hoc 70's Sci-Fi theme, we review the Bruce Dern film "Silent Running." A theme-heavy sci-fi film, we take a peak into the mind of an eco-terrorist of sorts. Back in the early days of the EPA and environmental themes, Silent Running assumes a bereft Earth devoid of natural beauty and encrusted by a mall-like super structure of artificial living with Dern's Freemen the champion of  Earth's last natural vestiges. Matt and Mark discuss the nature of ideological zealotry as it concerns environmental heroes and come to the conclusion, that while necessary to a certain extant, one could argue if such people as Dern's character aren't insufferable assholes.