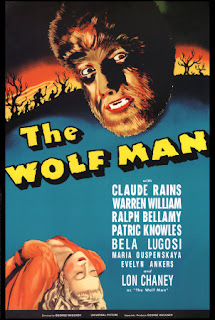 Mark is stunned and amazed this week to learn there's an old timey film that Matt actually appreciates and has chosen for the ultimate end to our mini werewolf marathon leading up to Halloween. The best offering of the werewolf films so far, The Wolf Man pipes in the smoke to enhance the gothic atmosphere of this classic tale. Pioneering the silver bullet and full moon tropes of the werewolf, The film deftly handles the the ying-yang schizophrenic themes of the beast man unlike lesser later offerings. Unfortunately, the theme of male stalkers fails to transcend the film's era and the Lon Cheney Jr character, making him more of a menace as a man than perhaps a wolf.