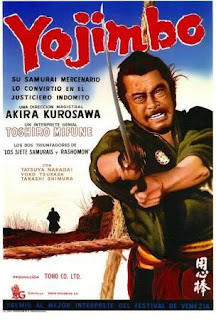 Time for a little "Fist Full of Akira Kurosawa" with our review of his classic Ronin Samurai film Yojimbo. Weighing heavy with the archetype of the Western Genre, Kurosawa reinterprets the dynamic in 19th Century feudal Japan. While its debatable such a small Japanese village could harbor rival gangs of such murderous intent, the true enigma of the film is the mysterious Ronin Sanjuro. His motivations are mercurial, his turned conscience uncharacteristic. While a great film, its biggest fault may be Kurosawa's need of the film's amoral anti-hero to forcible assume a typical High Noon archetype. But whatever, Sanjuro's a cinematic badass, and that's pretty cool.