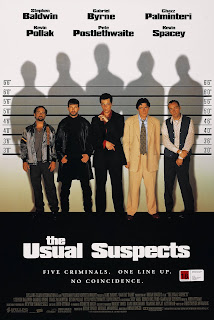 This week Matt and Mark get it together to review the classic The Usual Suspects. A plot intensive illusion, it leads the viewer along with its narrative with the classic "Just the Facts!" detective boilerplate. But at it's center is a deception, a ruse perpetrated by an unreliable narrator, for this film is a long-con and it's not only playing the characters, it's playing you the viewer. While Verbal and Kayser Sose are possibly one-in-the-same, neither one are confirmed real. The Usual Suspects deals in perception as a tool of social currency, exploiting our confidence. In classic Phillip K Dickian fashion, TUS plays on this theme and it plays it well. A film like no other, it is a hard-boiled crime drama mired in its tropes, but at the same time, it is something else.