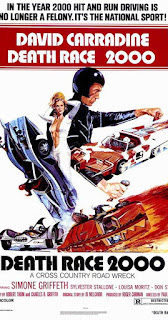 This go 'round Matt and Mark continue our 70's car movie them with the campy Death Race 2000. Like a macabre Cannonball Run, DR2K takes place in a futuristic dystopia where the sweaty masses (somewhere off-camera) are appeased by the breads and circuses of the titular race. Does it make any sense? Not really, but we go with it anyhow. Composed of farcical racers and their campy race cars, one can help but be reminded of far better fair in Swarzenegger's Running Man, specifically when it comes to production value. Matt takes issue with lack of geographic framing (no St. Louis does not have a Mediterranean climate and rolling coastal mountain ranges) while Mark highlights some of the film's more nonsensical nonsense. Perhaps more salient in the early 70's than it is today, DR2K remains entertaining high concept.