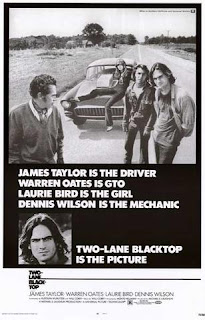 It's Matt and Mark's 7th Anniversary of doing the podcast, and for this go 'round we finish up with our 70's car movie theme with the artsy Two-Lane Blacktop. With a set of steamy hunky rock n' rollers racing about in a built out 55' Chev, this is as American as it gets... or is it? TLB has been debated as a 'metaphor' due to the sparseness of its character sketches (if they can even be called sketches at all), but what they're a metaphor for and what archetypes they represent are not obvious or clear. In the end, we don't really know these characters other than what meaning we graft on to them. Despite it's subtext, the film captures the early 70's zeitgeist of the post-Love era, which if anything, is an interesting cultural time more and more alien to us 21st Century folks.