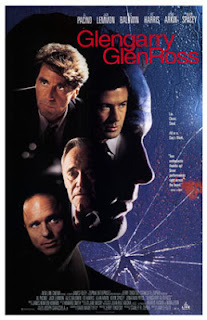 It's all about the fucking leads!!! This week Matt and Mark review the boiler room Mamet classic Glengarry Glen Ross directed by James Foley and starring a rock star "super group" of Oscar talent including Al Pacino, the late Jack Lemmon, Alec Baldwin, and Kevin Spacey. Like a meat grinder, this film shows you what happens when you take the weak pulpy bits of human pride and process them through the steel teeth of capitalism. To be a salesman is to be an actor, a character fueled by seduction and confidence, and if your act isn't honed, as Baldwin's character Blake puts it, "You can't close the leads you're given, you can't close shit, *you are* shit, hit the bricks pal, and beat it, 'cause you are going *out*. "