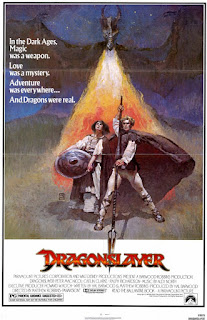 Tyrian? Valerian? Dragons? Could George RR Martin's Game of Thrones be nothing but an homage to the great Disney/Paramount hybrid Dragonslayer from 1981? Since Mr. Martin considers Vermithrax Pejorative the greatest cinematic dragon of all time, it just may be. Matt and Mark review the 35 year old dragon picture and believe that its classic affects still hold up to this day. An aged ragged bat-like dragon brings realism to the mythical beast, assuming such a monster had once existed. Beyond its quest/dragon mantle, Dragonslayer builds out its characters into complicated moral creatures questioning justice and the statusquo of patriarchy.