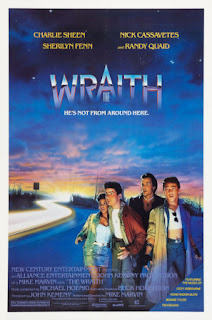 A movie concept that exceeds its ability to execute, The Wraith staring a pre-addled Charlie Sheen and a sultry pre-Twin Peaks Sherilyn Fenn is a film you have to admire for its idea. Adapting archetypal stories from Victorian legend and Greek myth, it fits them into a teen-age car movie like a dark supernatural American Graffiti, but without the deft hand of character building and plotting of -dare I say- George Lucas. Small details. Its highlight however is the cartoonish fun the film has with the evil car gang and their psuedo-lingo. Also the film stars Clint Howard, so you really can't complain.