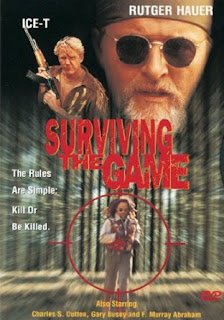 A modern take on the venerable Most Dangerous Game, Matt and Mark review the Ice-T vehicle Surviving the Game. A cast list like something out of a whose-who of guy-movie favs from the VHS era, we get to have fun with the likes of Gary Busey and Rutguer Hauer as they go on the male-bonding ritual of the bum hunt. Mark and Matt disagree on the plausibility of the action, but what we do agree on is that Janet Maslin of the NYT coats the premise with a racist paint brush and as a result, dismisses not only a decent action movie, but also its would-be movie goers. Janet, you are dead to us.

Download: 211 Surviving the Game
Posted by Matt Rivett at 6:34 AM