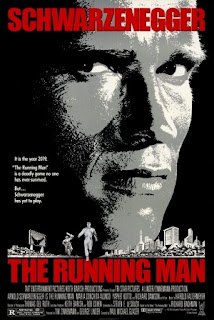 "I'll be back (again)..." This week we review the classic Schwarzenegger mid-80's camp action film The Running Man. A movie that works on many levels, its shining stars are a supporting cast who manage to play themselves spectacularly, including game show host Killian played by a venerable Dawson and the retired stalker/wrestler Captain Freedom played by the one and only Jesse Ventura. While attempting to predict 2017, this 1987 film gets many things right, including the nefarious ubiquity of staged reality television and the conmen/entertainers who profit from their fake narratives.