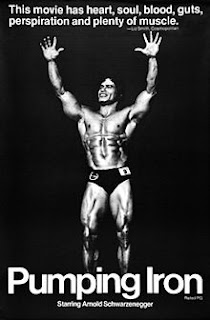 Time to Ahneld it up once again with the movie that made Schwarzenegger Schwarzenegger, the semi-scripted documentary Pumping Iron. Despite its contrived situations and its cursory treatment of the body building's "Je Ne sais quoi", it does give us insight into Mr. Schwarzenegger's persona and his charisma. Besides the subject matter, the film unknowingly gave birth to the the ripped bodies of the modern action stars. Prior to Arnold, a trim Sean Connery circa Dr. No used to be cinematic gold, but now we require comic book hero caliber physiques. A boon to Hollywood dietitians and trainers, no doubt.